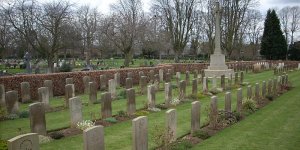 Commonwealth War Graves21-28 May is War Graves week, events are taking place across the country and tours of Kingsthorpe and Towcester Road Cemetery have been arranged by the Commonwealth War Graves Commission. Full details can be found here https://www.cwgc.org/.../war-graves-week-2022-event-list/The tour of Towcester Road Cemetery takes place on Sunday 22 May at 10.30am. This is a free event, but you should pre-book here https://www.cwgc.org/.../war-graves-week-2022-event-list/

Around the world ordinary people do extraordinary things every day for their community. They do it today, and they did it during the worlds war.

War Graves Week is a celebration of the remarkable everyday men and women who faced extraordinary times during the world wars and gave their lives for their communities.

During the two world wars, the United Kingdom became an island fortress used for training troops and launching land, sea and air operations around the globe. There are more than 170,000 Commonwealth war graves in the United Kingdom, many being those of servicemen and women killed on active service, or who later succumbed to wounds. Others died in training accidents, or because of sickness or disease. The graves, many of them privately owned and marked by private memorials, will be found in more than 12,000 cemeteries and churchyards. Northampton (Towcester Road) Cemetery contains 116 First World War burials and 17 from the Second World War, most of which form a combined war graves plot to the left of the chapel. The cemetery also contains five non-war service burials and three Czech war graves.

We will look at the stories of the 138 burials in this cemetery, including some Australians who died so far from their home.